I absolutely loved this book! My uncle gave me this book one year and I was unsure of it. I read the whole thing and its one of the few books I reread. I wish everyone could love this book as much as I do. It’s in my top five books of all time.

Oh my gosh, I loved this book. It was a level of crying I haven’t reached in a long time. It was sad but brought to light a whole new problem. This book is infamous. I decided to do this book because I feel like it needs more and more credit. Laurie Anderson wrote a book that was probably hard to write and understand in a way that most people won’t shun it.

The synopsis says all:

“Speak up for yourself–we want to know what you have to say.” From the first moment of her freshman year at Merryweather High, Melinda knows this is a big fat lie, part of the nonsense of high school. She is friendless, outcast, because she busted an end-of-summer party by calling the cops, so now nobody will talk to her, let alone listen to her. As time passes, she becomes increasingly isolated and practically stops talking altogether. Only her art class offers any solace, and it is through her work on an art project that she is finally able to face what really happened at that terrible party: she was raped by an upperclassman, a guy who still attends Merryweather and is still a threat to her. Her healing process has just begun when she has another violent encounter with him. But this time Melinda fights back, refuses to be silent, and thereby achieves a measure of vindication.

In Laurie Halse Anderson’s powerful novel, an utterly believable heroine with a bitterly ironic voice delivers a blow to the hypocritical world of high school. She speaks for many a disenfranchised teenager while demonstrating the importance of speaking up for oneself. 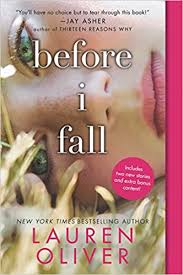 This book was heavy with how people can make changes in life. The narrator relives her death day seven different times before the book ends. Each day has differences that are made. I enjoyed this book and I really need to go re-read it.

When I read it I rated it 5 out of five stars. I honestly don’t think I would rate it any less if I read it today for the first time.

For the kickoff of National Poetry month, I am going to use a book I read in 2013 that is a story told in poems. 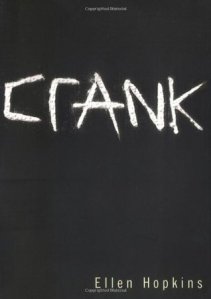 I do not remember much about this book but let’s go over what I do remember. I remember Ellen’s writing style. It was so unique to me when I read it. I had not seen a writing style like it and really haven’t seen one since. The Illuminae Files came close with some of their poems but it wasn’t identical.

I remember the main character was stuck on drugs and couldn’t bring herself off of them. If I remember correctly she ends up pregnant towards the end of the book.

This book was good but I gave it four stars? I do not remember why or if it was a mistake. But I did enjoy this book and can see myself rereading it. 🙂

If I remember this book correctly it is about a female who finds herself in a controlling relationship. This book covers a hard topic. I love Sarah Dessen and this book is no different. I marked it as four stars on Goodreads and I have no clue why. I enjoyed this book and the story that was told.